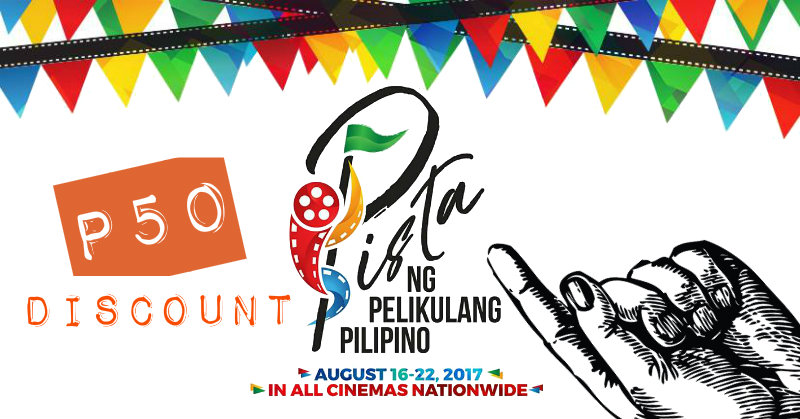 Pista ng Pelikulang Pilipino – if you don’t know what this is, you better check your local cinema to find out. But, in a nutshell, it’s a celebration of Filipino Films. Based on a Facebook post by Mell T. Navaro, “the Film Development Council of the Philippine (FDCP) is partnering with commercial theaters to exclusively screen Filipino films nationwide on August 16-22, 2017 dubbed as PISTA NG PELIKULANG PILIPINO 2017 (Year 1).” You can read the full article here.

A Delight to Filipino Cinemaphiles

As a cinemaphile in my own right, all I have to say is it’s about time. I have always enjoyed foreign movies but I’ve also always had this hankering for good films by my countrymen (Pinoy slapstick comedies are entertaining but they are not in my list of good films, FYI). There’s plenty out there, of course, like Bliss, the entire 2016 Manila Film Festival line up, and so much more. My problem is that award-worthy films like these aren’t shown often enough. This is why I am ecstatic that we are now having the Pista ng Pelikulang Pilipino (only until August 22).

Get a P50 Discount on Your Pista ng Pelikulang Pilipino Ticket

Press Release – In line with the partnership between Globe Telecom and the Film Development Council of the Philippines (FDCP) for the first Pista ng Pelikulang Pilipino, more Filipinos will now be able to purchase tickets for their chosen participating movies via the GMovies app.

By downloading the GMovies app for free on Google Playstore or on the App Store, first time GMovies users get ₱50 off their movie ticket/s to any Pista ng Pelikulang Pilipino (PPP) film by using the promo code PELIKULA.

“We fully support FDCP in their major initiative of giving Filipinos this ground breaking movie festival. Through accessibility of tickets on the GMovies app, we hope to encourage moviegoers to catch all PPP films, and movies in general, through legitimate sources whether in movie houses or in authorized streaming platforms,” says Glenn Estrella, Vice President for Digital Ventures, the innovator of GMovies.

This effort forms part of the company’s #PlayItRight campaign that sheds light to piracy and legitimate content consumption to provide an opportunity for local movies and film-makers to grow their business and expand to more audiences.

Movie fans can easily book and buy their top PPP movie picks in just these easy steps: pick the movie on the app, select the cinema, time, date and preferred seat/s, and finally choose the payment method. Users can choose among various payment options such as via credit card, claim code, GCash, bank payment, or M-Pass for Ayala Cinemas.

Birdshot, top-billed by John Arcilla is also supported by Globe Studios, the original productions arm of Globe, through a co-marketing partnership with TBA Studios.